by rmy
Spread the love

Many gas grills, including the most popular ones, are commonly priced at well over $200 via most online stores. And while the price is easily justified by the gas grill’s many features and advantages over both its charcoal and electric counterparts, it still comes off as pricey, and subsequently, out of reach for most buyers.

Designed with the easy going cook in mind, the Char-Broil sports a collection of useful features so unlike its price. It has the same features as many other highly priced gas grills, including 3 burners and a wide cooking area, which are perhaps the biggest reason for its popularity.

It weighs a total of 65 pounds, with dimensions of 17.8 (L) × 50.8 (H) × 43 (W) inches that render it light to carry. We analyzed the Char Broil’s design, construction, and features to test its performance and usability. Our review is shown below. 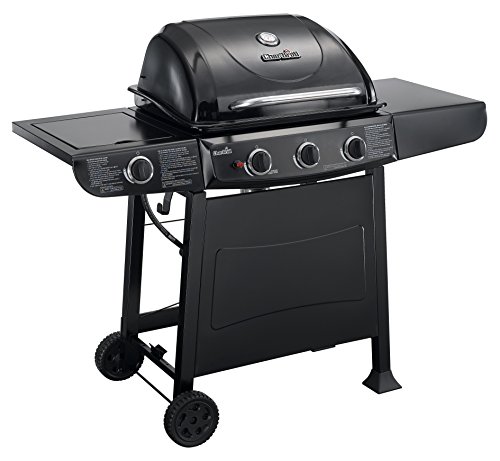 The Char-Broil Quickset 3 burner gas grill is an all-round product, merging functionality and simplicity with ease of usage and affordability. Being lightweight means that it is easy to carry around, while its small grill size renders it ideal for preparing meals for a small family or gathering of up to 8 people. 370 sq. inches’ worth of cooking space is an added advantage, as is the extra working space and three burners that come fitted on it. Ignition is made easy with a battery powered ignition button, while its 36000 BTU per hour guarantees high performance from start to finish.

It won’t heat up as quickly as other grills might at ignition, but it does cook meals thoroughly with its even heat distribution property. The thermometer included with the package may be off by 50 degrees in its measurements but still, adds to the overall functionality of the grill. It’s easy to say that at a price below $200, the Char-Broil Quickset gas grill has more useful features than expected, which translates to more bang for your buck.

As a major player in the gas grill market, the Char-Broil does have many competitors, providing a wide range of alternatives for the buyer. The closest competitors the Quickset has include the Char-Broil Classic 40000 BTU 4-burner gas grill and the Huntington 30030HNT 2-burner gas grill. In comparison with the either, it performs rather well, which only serves to further cement its place as one of the best gas grills under $200.

Considering price, all three are priced below $200. It competes favorably in the burner department with its 3 burners placing it above the Huntington’s 2 burners and slightly below the Char-Broil Classic’s 4 burners.

The Char-Broil Quickset gas grill is the kind of grill that is designed to perform its purpose to the maximum. At less than $200; you shouldn’t expect a grill to come with as many features as one priced above $500. Nevertheless, the Char-Broil serves up more in the way of features than many other models in its price range.

With 3 burners, a wide working space, easy assembling, fewer space requirements and lots of other qualities, this grill easily fits the needs of a small family or gathering with as much ease as possible.

While it may not come with some features, its other abilities and affordable pricing should easily fill the void. You might have to replace some parts as the years go by, but by the time that happens, you will have reaped its many benefits and individual part substitution should only make the grill last even longer.If you have bigger grill size requirements or need more than 3 burners, you might have to look at the other alternatives.

But if what you need is a grill that takes up less space, is easy to set up, easy to control and priced below $200, the Char-Broil Quickset 3 burner gas grill is a recommended product.